*All carts come standard with 4 wheels which help reduce cost.
**All carts can be ordered with 6 wheels that offer better tracking and tighter radius turns – but that certainly raised the cost. 6 wheels are required in narrower aisles.
***6 wheel models are not recommended to be used in areas with ramps.

Just like in life, a Mother carries her Daughter. It is a natural and beautiful thing!

What is the purpose of the Mother Daughter carts you may ask? Two words, “Stock Replenishment”. This is accomplished by doing a cart exchange and delivering fully stocked material handling tugger carts while at the same time picking up empty carts on the assembly line. For example operators on the assembly line are working on a “Two bin system” where they have a daughter cart with two bins that are filled with headlamps, when the operator has emptied one bin and is starting to work from the second bin there should be a Mother cart in route and on it’s way with fully loaded Daughter carts to replenish stock and do a cart exchange with empty carts.

Where are Mother Daughter Carts coming from and where are they going? 90% of the time Mother Daughter carts are coming from a warehouse after getting loaded with raw materials and parts and traveling on their routes through the factory and getting dropped off at the line side (not necessarily one continues assembly line, some factories have multiple assembly lines) for the purpose of replenishing assembly line workers with needed parts.

Typically on average our tuggable Mother Daughter cart system can replaced 9-10 fork trucks – which is huge. We call it “Fork Truck Free” work environment which reduces operating cost and increases worker safety. These Mother carts can be joined together in a train of 2, or more commonly 3, carts that are pulled by an electric tugger. Surprisingly, we much prefer these Mother carts get pulled by a tugger and not a forklift. We recommend you purchase your tugger from any local forklift dealer who can provide parts and service after the sale – in case your tugger breaks down.

Another advantage to the Mother and Daughter cart system over standard material handling tugger carts is that, say you need the third tow cart in a chain of 8 carts your forced to disassemble the entire chain and reconnect them. But with a Mother Daughter cart system you can simply pull the Daughter cart out while not disrupting the chain. This saves you valuable time.

When tow carts are fully loaded trying to connect them back together can be a real challenge. That is the beauty of the Mother Daughter Cart system. Instead of having to take one cart out of the chain the Parent Child cart system allows you to easily detach one of the Daughter cart out from the Mother carts while leaving the Mother carts linked together in a chain. The Daughter carts can be constantly changed or swapped out with ease.

We have common sizes of Mother Daughter material handling tugger carts. We can also manufacture custom sizes to meet our customers specific needs. A Mother cart can carry at least two of the standard medium size Daughter carts, or a combination of one large and one small daughter or just one very large Daughter cart. The Mother Daughter Cart combination is flexible and can be designed to allow you to carry multiple sizes in the same Mother cart footprint.

Lastly, the big advantage of our Mother Daughter carts over our competitors’ Mother Daughter carts is that our carts have “All Wheels on The Ground – At All Times.” The wheels on the daughter cart stay on the ground and don’t lift up. That is a big thing. Other manufacturers carts have Daughter carts lifted off the floor and the problem with that is when the cart is released you have a cart that weighs up to 2000 LBS rolling at the operator which is a big safety issue. We have won many jobs on this safety feature point alone. 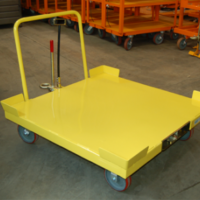 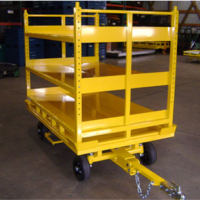 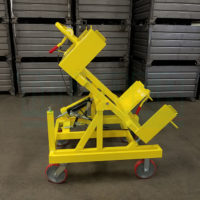 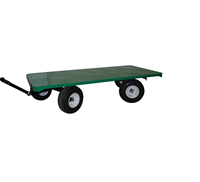