Does the latest generation of energy-saving light bulbs save energy? A comprehensive study conducted by Osram, the German lighting company, provides evidence that they do. 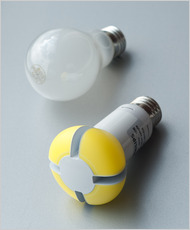 A standard incandescent bulb over its life will use almost five times the energy of an LED bulb, a German study concluded.

A blog about energy, the environment and the bottom line.
Go to Blog »

While that may seem self-evident, until the release of the report on Monday the answer remained unclear.

That is because no one knew if the production of LED lamps required more energy than needed for standard incandescent bulbs.

While it is indisputable that LEDs use a fraction of the electricity of a regular bulb to create the same amount of light, if more energy were used in the manufacturing and distribution process, then the lighting industry could be traveling down a technological dead end.

The study results show that over the entire life of the bulb — from manufacturing to disposal — the energy used for incandescent bulbs is almost five times that used for compact fluorescents and LED lamps.

The energy used during the manufacturing phase of all lamps is insignificant — less than 2 percent of the total. Given that both compact fluorescents and LEDs use about 20 percent of the electricity needed to create the same amount of light as a standard incandescent, both lighting technologies put incandescents to shame.

“We welcome these kinds of studies,” said Kaj den Daas, chief executive of Philips Lighting North America. The Osram study “provides facts where we often have only emotional evidence.” Philips recently became the first entrant in the Energy Department’s L Prize, a race to develop the first practical 60-watt LED equivalent to a standard light bulb.

To calculate what is know as a Life Cycle Assessment of LED lamps, Osram compared nearly every aspect of the manufacturing process, including the energy used in manufacturing the lamps in Asia and Europe, packaging them, and transporting them to Germany where they would be sold. It also looked at the emissions created in each stage, and calculated the effect of six different global warming indexes.

Those included the amount of greenhouse gas emissions created by each process, the acid rain potential, eutrophication (excessive algae), photochemical ozone creation, the release of harmful chemical compounds, and the resultant scarcity of gas, coal, and oil.

Compact fluorescents also contain harmful mercury, which can pollute the soil when discarded.

In addition to the amount of electricity needed for each process, the energy used and the emissions created as a result, were also calculated. In China and Malaysia, where part of the LED production took place, that meant coal and natural gas respectively. In Germany, where the lamps would be sold, electricity is created from a mix of coal, nuclear and renewable sources.

The methodology followed the procedures set down in ISO 14040/44, an industry standard. The results were certified by three university professors in Denmark and Germany as adhering to the standard.

“The difference in energy use between incandescents, compact fluorescents and LEDs is definitely significant,” said Dr. Matthias Finkbeiner of Berlin’s Technical University and chairman of the study’s review committee. “The results are very stable.”

While 60-watt lamps are more popular light sources, they were not used in the study as Osram does not yet have a commercial version. The amount of energy used to illuminate 60-watt-type lamps would increase, but the increase would affect all types of lamps and therefore not change the relative results, according to Dr. Berit Wessler, head of innovations management at Osram Opto Semiconductors in Regensburg, Germany.

Dr. Wessler expects the results to shift even more in favor of LEDs, as newer generations of that technology become even more efficient, requiring less energy to produce the same amount of light.

“Everything I’ve seen strengthens the assumption that LED efficiency will increase,” she said. “There has not been much improvement in incandescent efficiency in the last 10 years.”